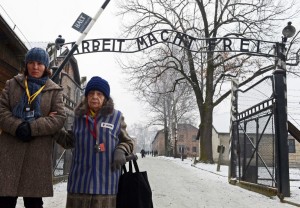 (FILES) This photo taken on January 27, 2014 shows a former concentration camp prisoner attending (R) a ceremony at the memorial site of the former Nazi concentration camp Auschwitz-Birkenau in Oswiecim, Poland, on Holocaust Day. Mostly in their nineties now, some are still well enough to attend on January 27, 2015 ceremonies marking 70 years since the Soviet Red Army liberated Auschwitz, the largest German death camp, on January 27, 1945 in what is now southern Poland. AFP PHOTO/JANEK SKARZYNSKI

UNITED NATIONS – As the Holocaust recedes further into history and as the era of the living witness closes, educators and researchers are grappling with how best to teach it to future generations.

“We need to create a real bond with history, to give it a human story rather than just present a series of frightening pictures of piles of bodies. We must make it relevant. We must constantly engage students, delivering the subject in bite-sized bursts,” said Jane Jacobs-Kimmelman, director of the International Relations Department at the International School for Holocaust Studies at Yad Vashem.

Jacobs-Kimmelman was one of several researchers and educators to participate in a discussion at the United Nations on Thursday about the future of Holocaust research and education. Of concern is how to make the Holocaust, which occurred more than 70 years ago, relevant to today’s students, particularly in places where there are few Jewish students or where perhaps students aren’t aware of their grandparents or great-grandparents’ stories.

Since 2013, laws mandating the inclusion of the Holocaust in curricula have been on the books in Austria, France, Germany, Israel, the Netherlands, Poland, Switzerland, and the United Kingdom. In the US, individual states decide on curriculum content. To date Holocaust education is mandatory in California, Florida, Illinois, New Jersey, New York and Pennsylvania.

While Connecticut doesn’t mandate Holocaust education, schools include the Holocaust as part of the unit on World War II. Beyond that, many schools offer a variety of history electives on the subject.

At Weston High School in Connecticut, the course “Facing History and Ourselves” provides a blueprint for the future of Holocaust education. The semester-long history course, for juniors and seniors, uses current events to link students to the past, said Weston Public Schools social studies teacher Jennifer B. Klein.

Although Klein didn’t attend the UN meeting, her class is an example of the future of Holocaust education. To prepare for the course, Klein trained with FacingHistory.org in New York City. The organization now has educational partnerships in 150 countries including China, Israel and South America.

In Weston, Klein opened the course by asking students to think about what influences their decision making. Next they consider “We and They” — how different social groups perceive each other, and how people consider the “other.” The students then examine how societal decisions and divisions can combine to allow atrocities to occur. Lastly, the students explore the aftermath of an atrocity and think about justice and remembrance.

“So by the time the students get to the Holocaust we’ve made a whole framework,” Klein said. “The students learn that anti-Semitism wasn’t something Hitler created. They learn he was bringing up ideas that were simmering below the surface. They learn that he was voted in and they look at the conditions that made that possible.”

As part of the course, students learn about Judaism and how they might find common ground with different elements of the religion – such as its emphasis on family, food, or study. Students also relate to the many photos they see of Jewish life before the Holocaust, from Orthodox men walking to synagogue in rural Poland to Reform Jews enjoying a day at the beach.

“I ask the students to think about what’s familiar to them. I ask them to see that these were people just like you and me,” Klein said.

If the class “Facing History and Ourselves” shows what can be accomplished with access to teacher education and dedication on the part of a school district, a recent report out of the United Kingdom shows how much more needs to be done. As if to echo the UN panel’s call for expanded teacher training and Holocaust education worldwide, a committee of parliament members recently cautioned the government that not enough teachers receive adequate training to teach the Holocaust.

According to Paul Salmons, program director at the University College London Centre for Holocaust Education, about 80 percent of those teaching the Holocaust said more professional development in this area is needed and priority must be given to this curriculum. Expanding teacher training will naturally lead to an expansion of Holocaust studies in the classroom, Yad Vashem’s Kimmelman said.

“In Europe you can understand there is interest where the Holocaust took place, but there is interest in other countries to study the Holocaust as a way of looking at their own conflicts. Argentina is a very good example of this,” Jacobs-Kimmelman said. “Still, we work very hard to make sure facile and incorrect comparisons to current conflicts are avoided. We emphasize the uniqueness of the Holocaust.”

That’s especially important in Central and Eastern Europe, said Szabolcs Takács, chair of the International Holocaust Remembrance Alliance, an intergovernmental body that works to expand Holocaust education around the world.

“The trauma of the Holocaust was distorted by communist regimes because it was ignored. It’s only 25 years since we can openly talk about the Holocaust, which is of course a national tragedy in Hungary,” said Takács who is Hungarian.

According to the report, 93 percent of the students said they felt learning about the Holocaust to change racist attitudes missed the mark, said Dr. Deborah Dwork, the Rose Professor of Holocaust History and Founding Director of the Strassler Center for Holocaust and Genocide Studies at Clark University.

Some educators worry recorded testimonies and DVDs aren’t as powerful as having actual survivors or other eyewitnesses, such as camp liberators, speak to students. Oral histories, such as those archived at the United States Holocaust Memorial Museum, can help fill that void. Second and third generation survivors are another untapped resource for the classroom.

“It is quite clear that the world is not finished learning about the Holocaust, despite the fact that the survivor population is diminishing,” Jacobs-Kimmelman said.